In this article, we’ll take a look at the signs and symptoms of worn CV joints, how they fail, and how to tell if they are damaged. Since replacing joints costs a lot of money, we’ve broken down your options below to help you make an informed choice.

What are the CV joints?

A constant velocity (CV) joint or axle is a type of mechanical linkage that connects the driveshafts to the wheels. The joints are called as such because of their ability to transfer motion at a constant speed, regardless of the angle of rotation. CV joints are commonly found in front-wheel drive vehicles, but they can also be found in rear-wheel-drive vehicles with independent suspension.

The CV axle assembly consists of two joints: the inner joint and the outer joint. The inner joint is connected to the transmission while the outer joint connects the driveshaft to the wheels. Each joint is made up of a cage, rolling elements, an inner race, and an outer race or housing. The whole joint is encased in a flexible rubber boot that is filled with a molybdenum disulfide grease.

What is its purpose?

The constant velocity joint’s primary purpose is to allow the torque from the transmission to be transferred to the wheels. Since the wheels are constantly in motion due to the suspension and steering, a flexible drive shaft capable of transmitting torque at various angles is required. The constant velocity axle is widely used in this application because it can transfer power to the wheels with little to no loss, regardless of the angle or the rotation.

What are the signs of bad CV joints? 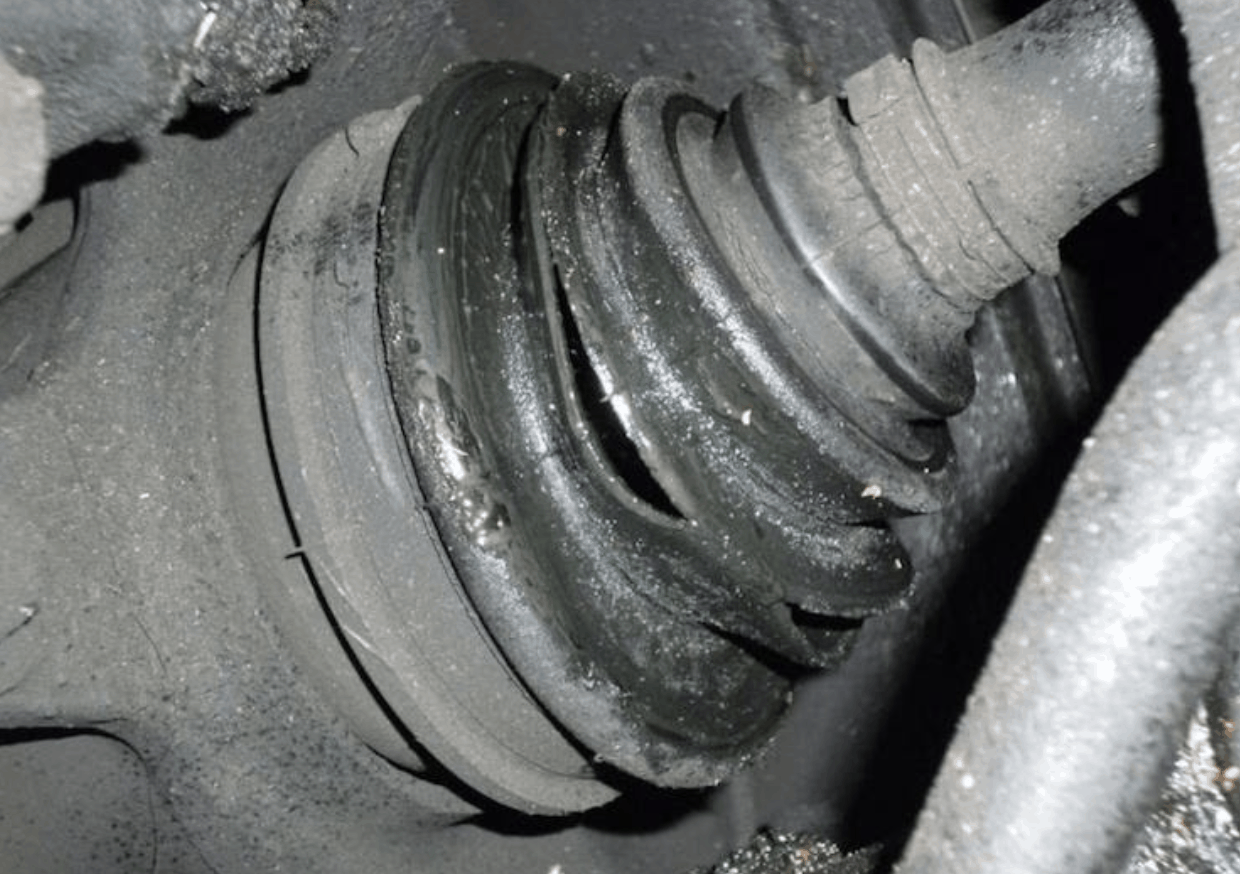 Signs of bad joints can be narrowed down to three: unusual noises, vibrations, and leaks. If you have these symptoms as of late, your constant velocity joint may be worn. Early detection and preventive action can prevent costly repairs in the future.

Clicking and clunking noises when turning

Generally associated with bad wheel bearings and worn suspension components, a clicking noise is also a sign of failing constant velocity joints. Clicking usually happens when turning, but can also occur during acceleration and cruising. The noise is usually caused by excessive play, broken components, or lack of lubrication in the joints.

Vibration and shuddering while the vehicle is at speed is another sign of broken CV axles. Excessive and unusual vibrations are commonly linked to out-of-round tires, worn suspension components, and defective bearings. In the case of worn constant velocity joints, vibration and shudder are caused by disintegrated roller elements, broken cages, damaged races, or excessive CV joint angles.

Leaks are another sign of worn joints and can only be found through a visual inspection. The joint is filled with grease that keeps the bearings lubricated and cool while they are in operation. Cracks and tears in the flexible boot will cause the grease to leak out and smear on the protective boot’s surface, tires, and the neighboring suspension and steering components.

What causes CV joints to fail? 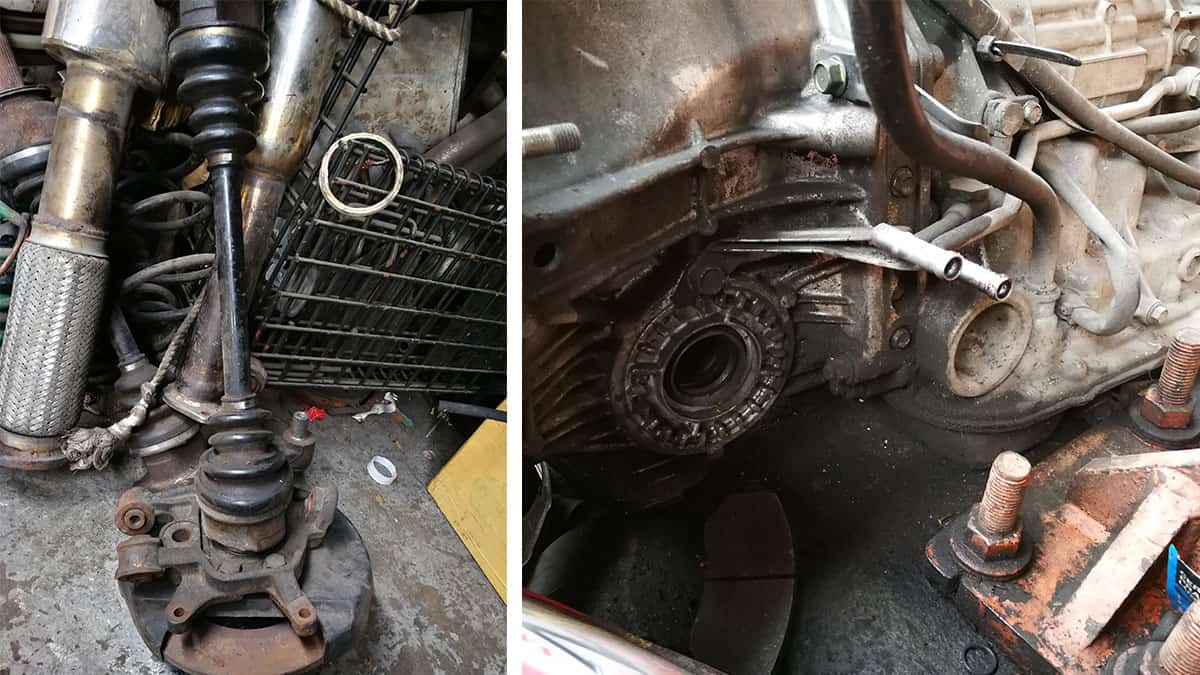 CV axles are made from durable materials and can withstand a lot of punishment. They are designed as such to be able to handle the tremendous amount of forces being transmitted to the wheels and the intense vibrations they are constantly subjected to. However, the joints will eventually wear down due to ordinary wear and tear, vibrations, impact, fatigue, and other extraneous forces.

Punctured, pinched, or torn flexible boots are the most common causes of CV axle failure. The flexible protective boots are ordinarily made out of neoprene rubber, silicone, or thermoplastic to allow for a motion range. Out of all the parts of the CV joint, the boot is the most susceptible to damage due to their construction and location under the vehicle.

CV axle boots have a convoluted design similar to that of bellows. Ordinary wear and tear may cause cracks to form in the boot, eventually leading to larger tears. In addition, the location of the boot under the vehicle makes them vulnerable to damage from sharp rocks or any other debris from the road.

Water, debris, and other contaminants may enter the assembly if the protective boot is ripped. Any form of contamination will reduce the ability of the grease to lubricate and cool the bearings efficiently. Also, dirt and debris may damage and corrode the rolling elements and races inside the CV joint assembly.

Unlike regular vibrations from the road, impact forces are more significant in intensity and can cause severe damage to the joint components. Driving over potholes at speed and accidents are great examples. Constant velocity joints are not designed to handle these kinds of abuse and break down from the repeated impact.

How to tell if my CV joints are bad? 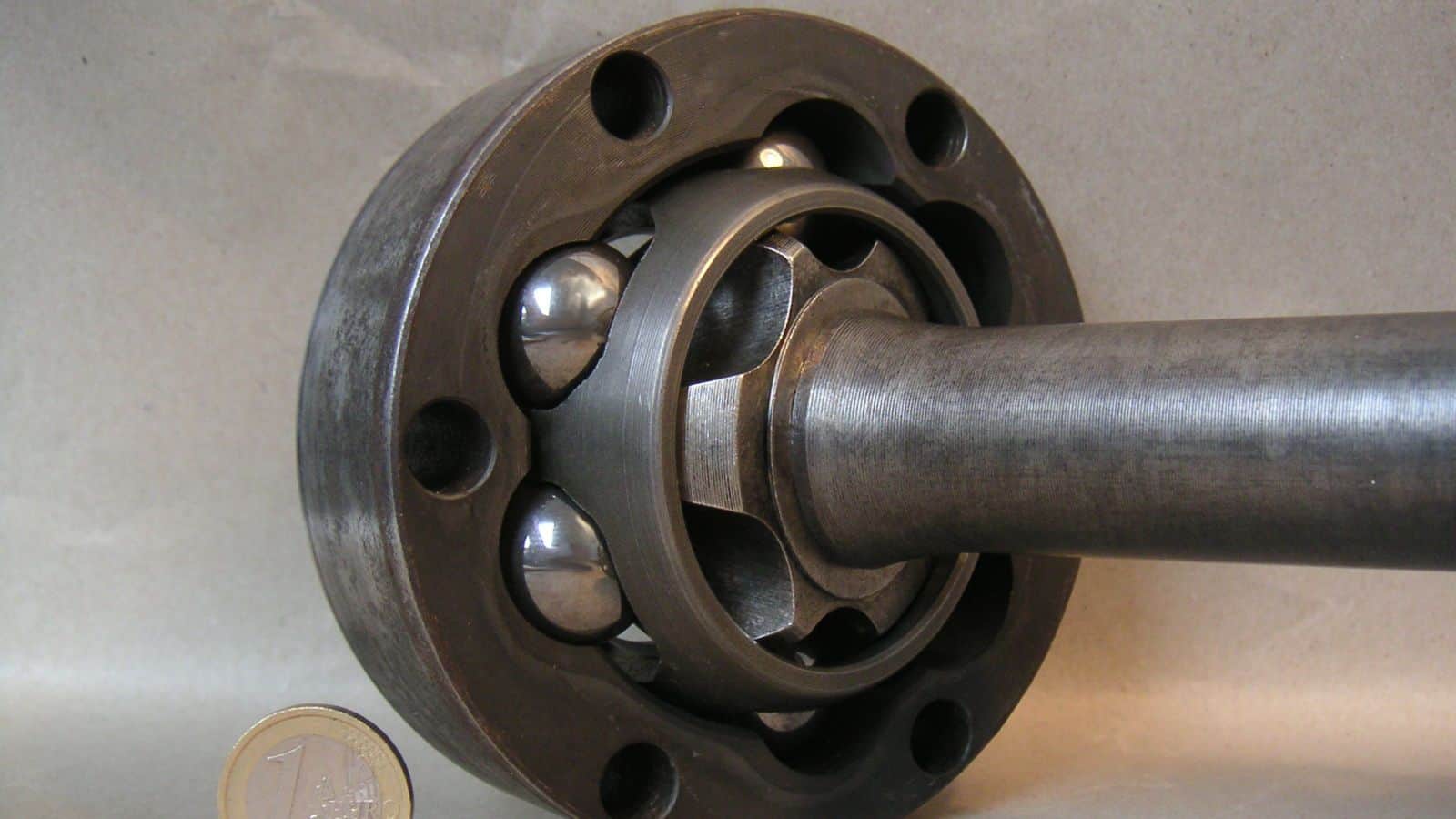 If your vehicle shows signs and symptoms of worn CV axles, it does not automatically mean that the joints are indeed worn or damaged. Unusual noises can also be caused by other problems such as damaged bearings, worn tires, or failing suspension components. A visual inspection is necessary to confirm the root cause of the problem.

How are the CV axles repaired?

CV joints can be repaired depending on the damage and the condition of the joint. If the flexible boot is damaged and is leaking grease, the joint can be repacked with new grease and fitted with a new boot. This is a lot cheaper than replacing the entire assembly. If the damage is in the bearing assembly or the shafts, the whole unit must be replaced.

How much does it cost to have the joints replaced? 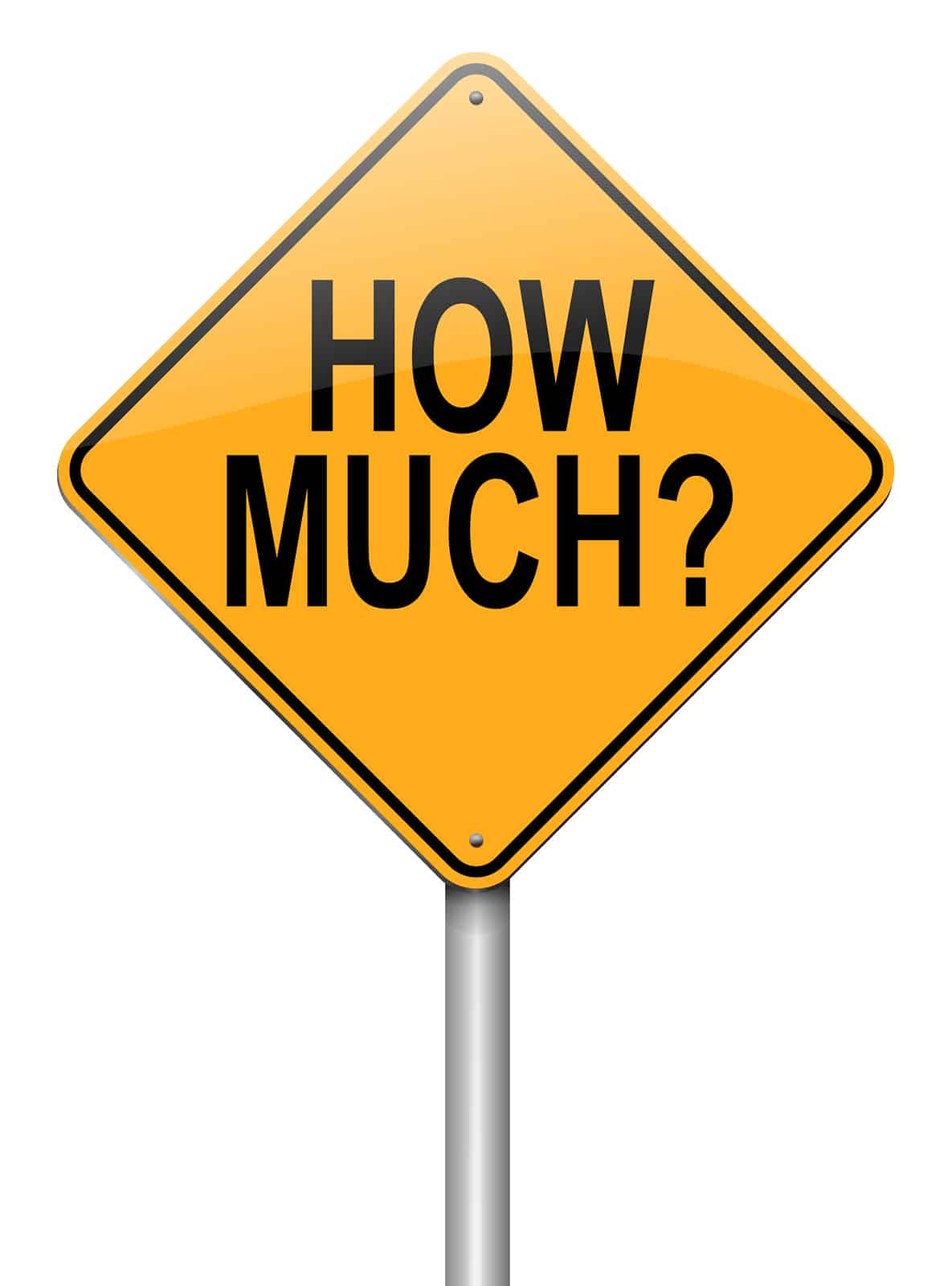 The cost of replacing CV joints usually depends on the make and model of your vehicle. There are several types of constant velocity joints, and their prices also differ. If your car is old, replacement joints could be hard to find and are typically more expensive than modern joints.

Replacing constant velocity axles typically costs around $800. This includes the cost for parts, labor, and other fees. Where you are taking the vehicle for repairs also matters. Expect to pay upwards of $1,000 in a dealership and around $700 for an independent mechanic. It would be wise to ask around for estimates to see which service fits your budget.

The price of a constant velocity joint assembly ranges from $125 to $400. In some cases, you may need to replace both joints, doubling the cost of the parts. If one joint is damaged, the other joint couldn’t be far behind. However, if the damage is only to the boot and that the bearings are in good condition, repacking the joint is the best course of action.

Joint replacement is a labor-intensive procedure that requires hours of work. Understandably, labor costs make up the bulk of the replacement fee. Labor rates vary from place to place, but on average, the average hourly rate is $100. Each joint can be replaced within two or three hours, so expect to pay around $300 for the labor.

Alternatively, you can replace the defective joints yourself. Albeit challenging, you can save a lot of money just from labor alone. However, before going the DIY route, you must make sure that you have the correct joints for your vehicle and learn beforehand how to perform the swap. Check this helpful video from Scotty Kilmer.

Can I drive with bad CV joints? 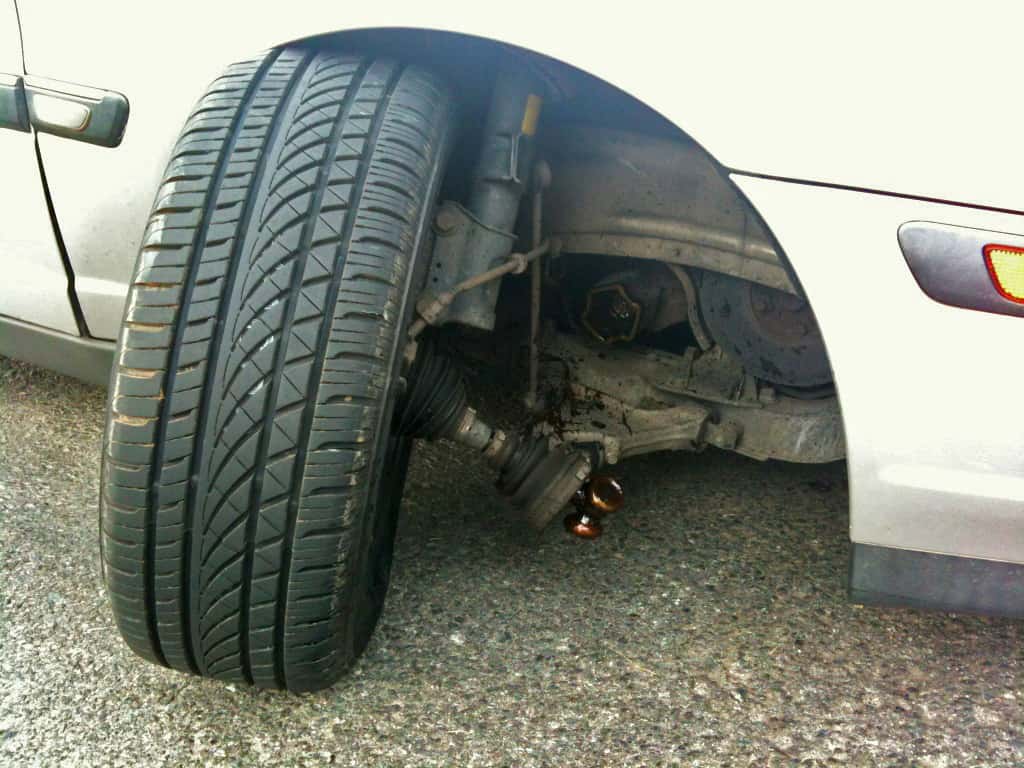 No. Driving with worn CV axles presents a serious safety issue. If you are going to drive the vehicle, you should only do so if you are taking it for repairs. Bad joints can give way at any time, and you may run the risk of losing control of your vehicle. If any of the previously discussed symptoms appear, the vehicle should immediately be taken to the mechanic for repairs to avoid further damage to the joints.

The constant velocity joint is a crucial component that transmits power from the engine to the wheels. If the joint fails and its symptoms are neglected, it will render the vehicle undrivable and severely damage the joints. Periodic checkups, especially on the health of the boots, is essential in preventing joint failures. Replacing broken joints is costly and time-consuming, but you can also do it yourself, provided that you have the right tools and knowledge.