7 Symptoms of a Bad Catalytic Converter (and Replacement Cost) 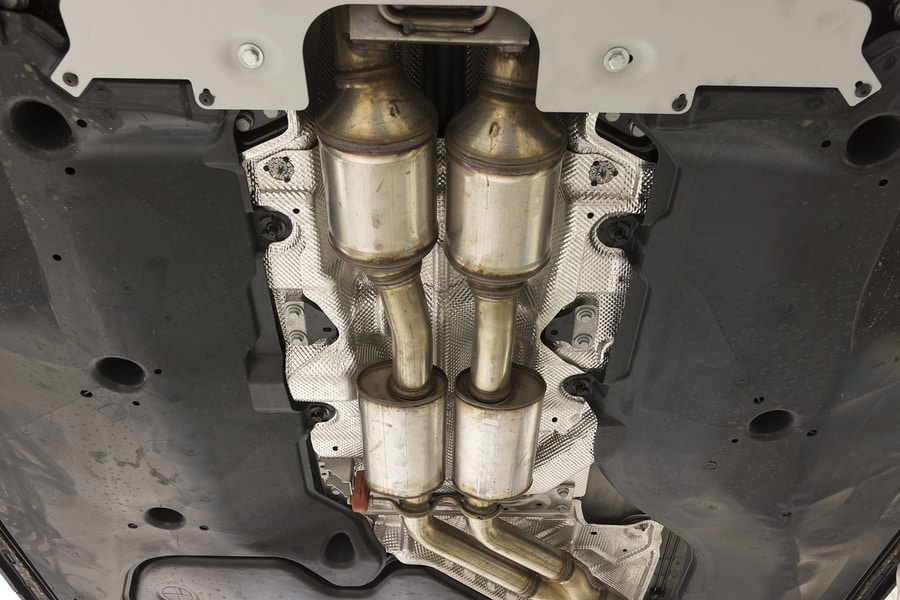 If you’re wondering how much it should cost to replace a catalytic converter, you’ve arrived at the right place. Catalytic converters or a ‘cat’ are an item in your vehicle’s exhaust system that rarely gets mentioned. That’s because they usually last the lifetime of the vehicle. However, like anything mechanical, they can still fail.

Catalytic converters are a vital component in your vehicle because they help remove toxic gasses such as carbon monoxide and convert them so that they exit the exhaust in a far more cleaner state. Their usage is also vital to improve the air we breathe, lower deaths created by air pollution, and lower the effects of greenhouse gases from cars.

This article also explains what a catalytic converter does, how they work, the common problem causes, the catalytic converter replacement, the symptoms when they go wrong, and advice on their repair. Read on for a full explanation so that you’re better prepared in the event one fails in your car.

What is a catalytic converter, and why do cars have them?

Thinking back to your high school days, you may remember learning in chemistry lessons where a substance that caused a chemical reaction is known as a ‘catalyst.’ That principle was applied to a catalytic converter’s purpose. Therefore, the reaction would still happen inside, converting the gases and letting them exit through the exhaust in a less toxic state.

These harmful gases in question are carbon monoxide, nitrogen oxide, and unburned hydrocarbons. They are a risk to human health as well as the environment – particularly in causing smog and acid rain. The V8 muscle car segment effectively ended during the 1970s, and this was not only due to the fuel crisis and high insurance costs but mainly due to the Clean Air Act at the start of the decade. This change saw the beginning of the motor industry’s attitude towards cleaner emissions controls, which led to the catalytic converter development in 1975.

Most catalytic converters are located between the exhaust manifold and the muffler and resemble a smaller version of an exhaust silencer. However, depending on the type of car, they can be found in different positions. Some cars with twin exhausts have one for each pipe, and some more expensive cars have two fitted in-line in order to reduce emissions further. Since their widespread adoption, manufacturers have found that they work better nearer the top of the engine, where they can warm up quicker.

How does a catalytic converter work?

Catalytic converters begin their job of breaking down and transforming toxic gases to cleaner ones (such as oxygen, water, and carbon dioxide) as soon as the engine is started. However, they are much more effective, around 800 degrees Fahrenheit.

The internals of a catalytic converter consists of two ceramic blocks that resemble a honeycomb design. They look this way because of the way they’re made up: thousands of microcellular channels that are coated with expensive metals such as platinum, rhodium, and palladium. These metals are the principal reason thieves steal catalytic converters, which attract scrap values of as much as $200, depending on the metals’ rate at that time.

What happens when the catalytic converter goes bad? 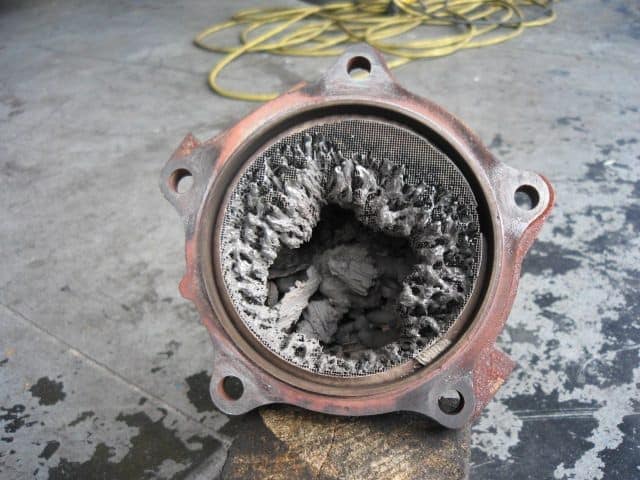 Luckily, the chance of having a problematic catalytic converter is a rare occurrence, but like all things mechanical, there’s always a chance of failure. Some cats will last for between 70,000-100,000 miles, ten years, or even the vehicle’s entire lifespan. At the same time, other cats will fail sooner if the car isn’t used for journeys where they’re able to achieve the optimum temperature to work properly before the engine is turned off.

The origins of cat problems usually take place due to issues with the engine itself. Failure can also be caused by start-stop journeys since the engine will never warm to the optimum temperature. Other causes include overheating, contamination, and physical or accidental damage to the converter itself, both internal and external while driving. Usually, the only solution is not to repair but replace the converter, which is generally an expensive repair.

A catalytic converter that becomes non-functioning due to an engine problem will encounter a temperature so high that it can melt the precious metals inside or even break apart the honeycomb material. The causes that lead to a non-functioning cat originate from simple mechanical issues that could be easily prevented by regular engine maintenance. These range from worn-out spark plugs, faulty oxygen (or Lamda) sensor, an incorrect mixture of air/fuel, improper engine timing, or any other issue which allows unburned fuel to leave the combustion chamber, ruining a catalytic converter.

Meanwhile, suppose your vehicle’s engine suffers serious problems such as worn piston rings, bad valve seals, or a failed gasket. In that case, it could lead to fluids that aren’t meant to enter a car’s exhaust system, such as oil or antifreeze, causing irreparable damage to the converter. If this happens, it will line the ceramic catalyst with a substantial layer of carbon soot that cannot be repaired without replacement. Sometimes this soot will build up even during normal driving and when a car is regularly maintained and can still lead to a clogged up cat.

Can you drive a car with a bad catalytic converter?

You can drive a car with a faulty catalytic converter for some time, but it will become obvious that there is something wrong with the way the engine performs. There are other symptoms to look out for, and naturally, of course, there will be more physical issues with the way that the car drives, which will alert you that something is wrong. Here are the main examples to look out for:

If you detect any of the issues above, you should have your car inspected at a garage.

How do you unclog a catalytic converter?

The fix for an over clogged catalytic converter is usually replacement. However, if you wanted to take more preventative measures to stop issues with your catalytic converter in the first place, you could look into products that clean it. The two primary preventive measures you can make include fuel system cleaning products that you can apply yourself and ones that are carried out by an exhaust cleaning service at a garage.

This kind of practice can prevent problems when having the car inspected and failing emissions tests. It’s definitely worth considering this if you only cover short, start-stop journeys. Short regular journeys often lead to some unburnt hydrocarbons because the catalytic converted isn’t able to reach the optimum temperature to perform correctly.

You can do other things to keep your cat running efficiently, including driving your car at speed on the freeway at least once every couple of weeks for up to half an hour and using premium gasoline.

Why is it so expensive to replace a catalytic converter?

The simple reason why catalytic converters cost so much to replace is the precious metals inside, such as rhodium, palladium, and platinum, within the honeycomb structure. The cost can vary depending on how many cats your car is fitted with, whether the part itself is aftermarket or from the manufacturer (OEM – original equipment manufacturer), or depending on the vehicle’s make and even its age.

Suppose you own an older gasoline or diesel-engined car that was built before 1981. In that case, the cost of replacing the catalytic converter is substantially less, but only as long as you have a car that was sold in substantial numbers from new and isn’t too old or rare today. The cost of replacement is usually less than modern cars because pre-1981 cars have a much simpler designed two-way catalytic converter, which ranges between $175 to $750, plus up to $150 for labor.

If you own a gasoline engined car built after 1981, it’ll most likely be fitted with a three-way catalytic converter. As you’ve probably guessed, it’s a more complicated design, which in turn means you’ll pay more to replace one. Once you’ve paid up to $150 for labor charges, expect the cat to cost anything between $500 to $2,200.