Whether you’re expecting a newborn or are just taking the grandkids for the weekend, you need to make sure that you’ve got your kid’s safety situated in the back seat. And that starts with following the California Car Seat Laws.

If you’re thinking back to when you were a child, chances are you’re not doing enough to stay compliant and keep your kids safe. Times have changed, and the California Car Seat Laws have changed too.

Why Are Car Seats Mandatory?

It used to be that you could secure your kids into the car; however, you see fit. But the problem was as the science came out showing how much safer kids were in car seats, many parents didn’t follow suit.

That’s why the state stepped in and made sure that parents were doing what was safe for their kids and the California Car Seat Laws were introduced as well.

Cue the tried and true, if inaccurate, argument, “well we survived as kids, didn’t we?”. The fact is that yes, you did, but others did not.

According to data from the IIHS, the number of infants that die annually in car crashes has fallen by 80 percent, and those under the age of three have fallen by 66 percent. Bolstering the argument for car seats is that the National Institutes of Health, using a car seat correctly, reduces the risk of fatal injuries between 70 and 80 percent.

So, before we discuss the California Car Seat Laws, let’s talk about why are car seats mandatory? Because they save lives. 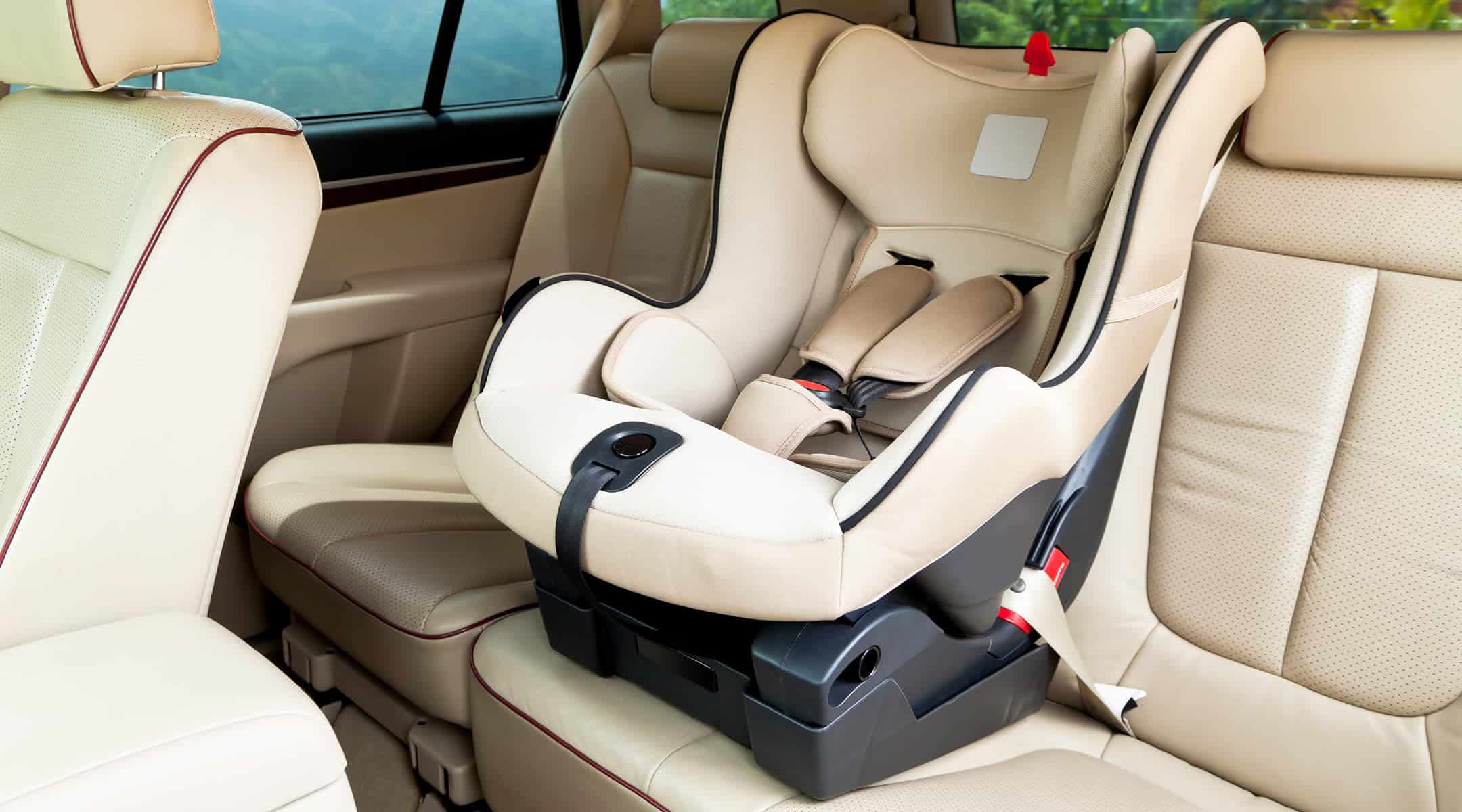 Every car seat has an expiration date. Typical car seats typically expire between six to ten years after they were made. It’s extremely easy to find this data – as it’s stamped directly onto the car seat.

The reason car seats expire is simple; the plastic components in them wear down. You expose your child’s car seat to extreme temperatures inside your car, get food and drinks dumped all over them, and have the weight of a child pressing down on them.

When it comes to your child’s safety, don’t take the risk of using an expired car seat.

While you should never use an expired car seat – no California Car Seat Laws make them illegal to use.

Yes and no. If you have multiple children close in age, you can reuse the car seat as long as it isn’t past its expiration date. However, if you’re looking at buying a used car seat from someone you don’t know, this is never a good idea.

That’s because unless you know the person, you don’t have a full history of a car seat. If a car seat has been in a car that was in an accident, or even if they stowed it as luggage on an airplane, the car seat’s integrity is compromised.

Even worse, you probably won’t know that it’s damaged until it’s too late. If small cracks form on the inside of the plastic, this will affect the car seat’s safety, but you’ll never see them unless you get into an accident, and that car seat fails.

Just like there are no laws regarding using an expired car seat, there are also no rules mentioned in California Car Seat Laws regarding buying or selling used car seats. For more maintenance tips.

California Car Seat Laws for Children Under the Age of 2 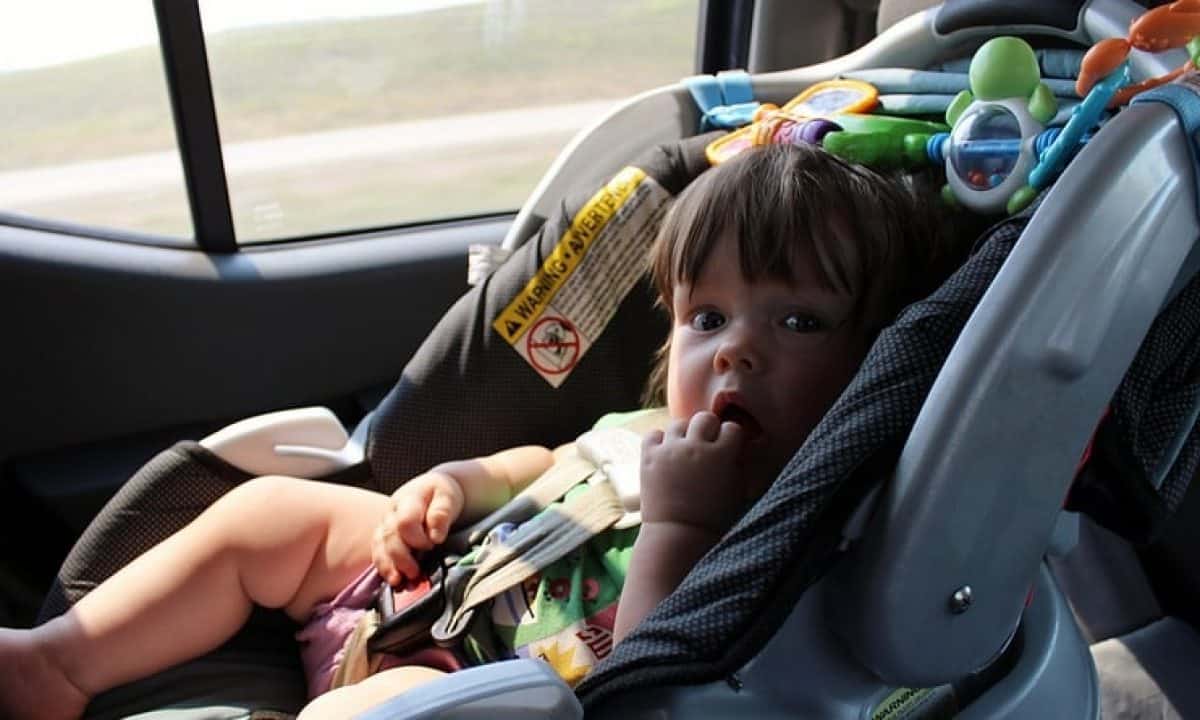 That’s because, for newborns and toddlers, rear-facing car seats are five times safer.

In addition to the California requirements to have children under the age of two in rear-facing car seats, they also require that there not be an active airbag in front of a rear-facing car seat. That’s because when an airbag explodes, they have enough force to damage a car seat and the child that’s sitting in it.

When Can I Move My Child to a Forward-Facing Car Seat?

In California, you are legally allowed to move your child to a forward-facing car seat when they meet one of three conditions:

In fact, many of these safety organizations recommend that you buy a different rear-facing car seat once your child outgrows the infant carrier to keep them rear-facing longer.

When Can I Move My Child to a Booster Seat?

Once your child has outgrown the front-facing car seat, it’s time to consider a booster seat. While California Car Seat Laws doesn’t mention any law regarding when you have to move your child to a booster seat after the age of two, they require that all children meet the manufacturer specifications for the car seat they are in.

These harnesses disperse the area of impact across your child’s body, giving them better protection then you can get with a traditional seatbelt. 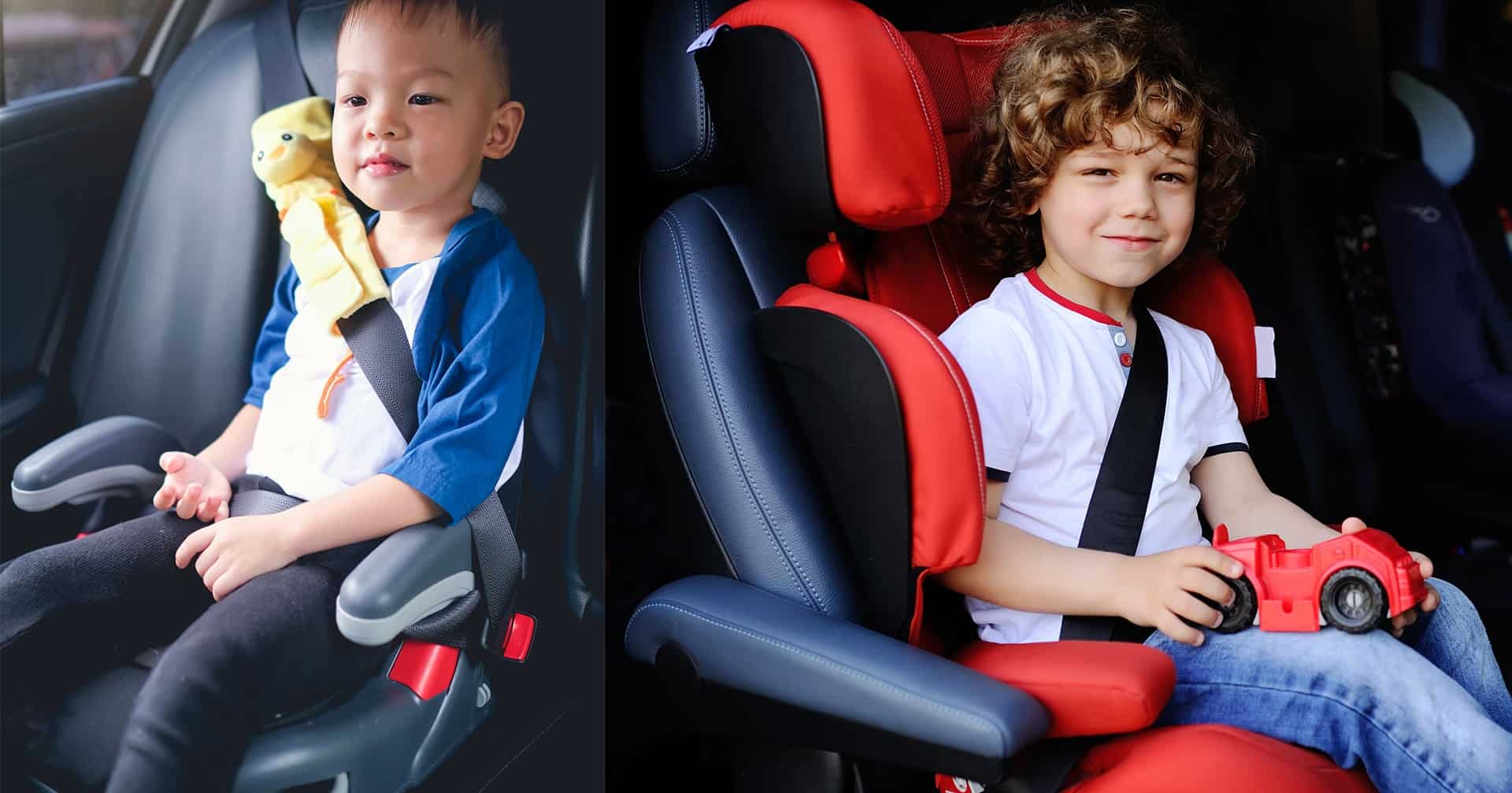 Once you’re in the market for a booster seat, you’re going to see two main types, high back booster seats, and backless booster seats. But what’s the difference and which one do you need?

The two most significant differences are head control and seatbelt location.

High back boosters provide more head support, and thus more head control then backless boosters. Many high back boosters have side supports for the head built right into the car seat. Not only do these provide more support and safety, but they are usually more comfortable as well, especially if your child is on the smaller side.

Not only does this make for a far more comfortable car ride for your child, but it also makes their car seat significantly safer. Your child’s seat belt needs to be resting up against their ribcage, as that’s the part of their body that is best equipped to handle a collision.

Now, as your child does get older and a little bigger, it’s less likely that their seatbelt will ride up against their neck, even if they’re in a backless booster.

Which One Do I Need?

The truth is that there are no requirements stating that you have to get either a high-backed booster or a backless booster. High-backed boosters provide a little more comfort and safety for your child, but they are also more expensive.

Additionally, the high-backed booster typically has a maximum height. No matter what car seat you get, make sure that your child will fit in it properly.

When Can I Take My Child Out of a Car Seat? 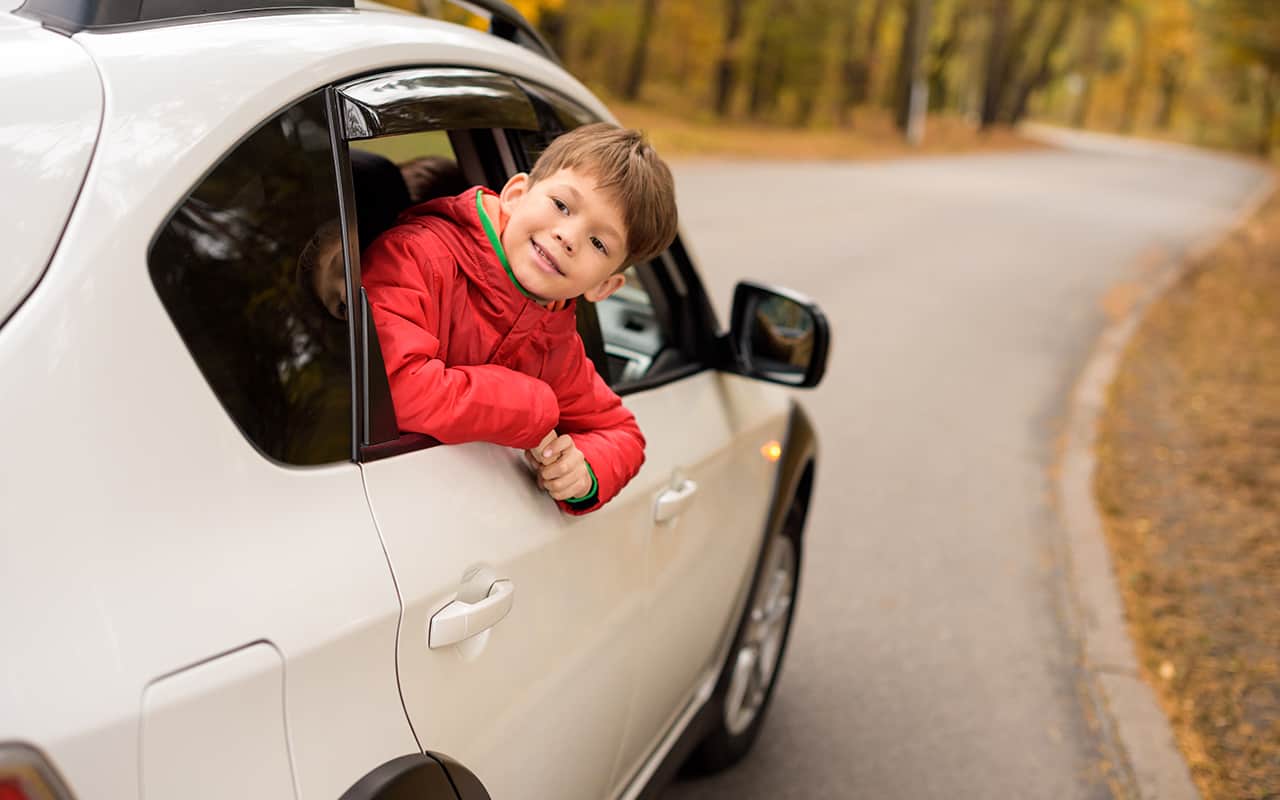 In California, you can take your child out of their booster seat once they meet one of two conditions:

However, of the two requirements, the height requirement is the more important one. Even if your child is over the age of eight, if they are smaller than 4’9″, then the seatbelt they are wearing won’t fit them properly.

This means that your child risks having the seat belt press against their neck instead of their rib cage if you get into an accident. A rib cage can handle forceful collisions, even if it’s uncomfortable. Unfortunately, your neck doesn’t offer the same protection, that means if you get into a serious enough accident, your child’s seat belt could decapitate them.

Today’s world has more car seat laws then anyone would have imagined even 30-years ago. However, laws i.e. California Car Seat Laws help to save lives, even if they seem a little complicated. The good news is, with just a little research and time, you can ensure that you’re meeting all the California Car Seat Laws and keeping your children or grandchildren safer in the process.

If you’re still looking for more information about California Car Seat Laws after reading this breakdown, check out this handout provided by the California Highway Patrol. 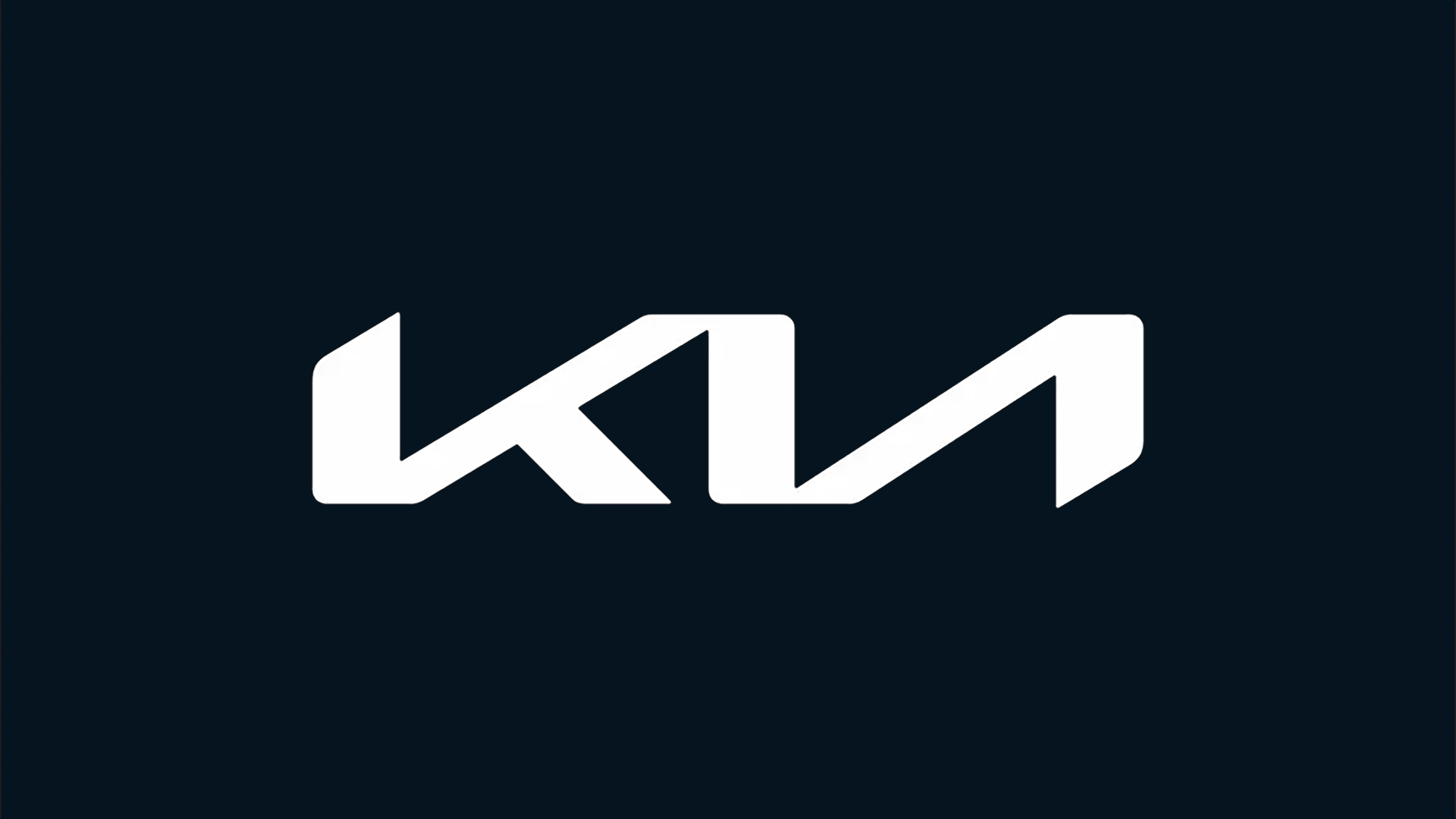