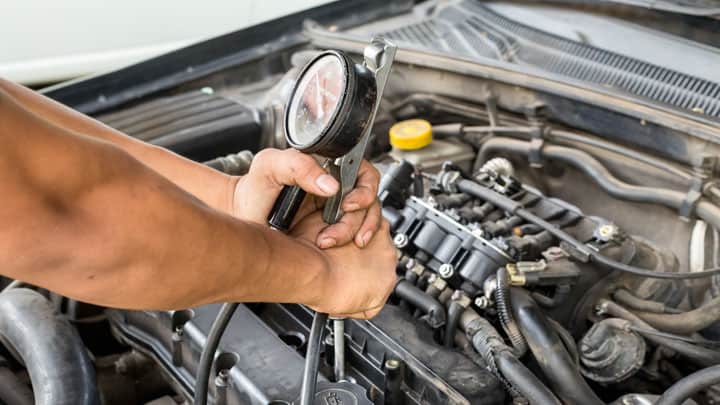 If you’ve ever driven a car and found it has lost power while accelerating or driving normally, there are several potential causes. Many of these are due to lack of proper maintenance and failure due to age or usage. A loss in horsepower is normally to do with incorrect flow of air, fuel and compression.

Finding the cause of your car losing power when accelerating can take time, but there are as many as eleven obvious problems to look for in our list that could be slowing you down on your journey.

There are three key areas of the engine bay that mechanics know can cause loss of power; these are malfunctions with either the sensor, actuator, or mechanical. Any problem with one of these three areas can affect power delivery whether your car has a gas or diesel engine.

Whether you drive a gas engined car or one that runs with diesel, read on to discover the top 11 most common causes for a car to lose power when accelerating: 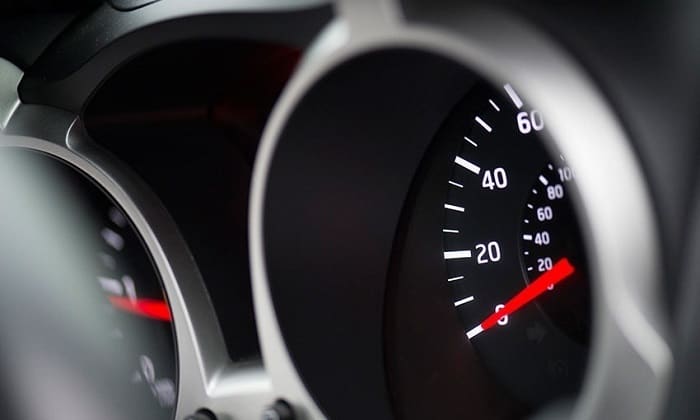 Sensor malfunctions affect more modern cars with electronics. The camshaft position sensor, oxygen sensor, crankshaft sensor, MAF sensor, and all sensors that play apart in the electronic fuel injection system can cause a loss in power.

Camshaft position sensors are commonplace in both modern gas and diesel-engined cars today. Their role is to record the speed of the camshaft of the vehicle and send the information to the electronic control module (ECM).

An ECM gathers information from various sensors in modern engines. In the case of the camshaft position sensor, the speed of the camshaft is recorded and can be sent to the ECM and manage the timing of both the ignition and the fuel injection accordingly.

Occasionally however, a camshaft position sensor can malfunction, and this information on the camshaft’s speed can’t be sent to the ECM. If this happens, the performance of the engine will be affected, and it could cause the engine to stop entirely, leaving you and your passengers stranded at the side of the road. The good news, however, is that once diagnosed, camshaft position sensor replacements can often be at the lower-priced end of repairs at an auto shop.

Mass airflow sensor (MAF) issues only affect gas engined vehicles. A MAFs principal job is to measure the air flowing into the engine. As it’s a sensor, it also sends the information to another computer, called the Powertrain Control Module (PCM). As air is an essential ingredient of an engine’s performance, the information is used by the module to record the load placed on the engine.

If a malfunction were to occur with the mass airflow sensor, the engine’s performance will unsurprisingly be decreased.

Another sensor that can reduce power when accelerating is the oxygen sensor, which measures the amount of exhaust gasses that leave the engine. Its failure can affect the performance of both gas and diesel-engined vehicles. The electronic control module (ECM) gathers the information by the oxygen sensor to confirm the exact air-to-fuel ratio that is happening in the engine in real-time.

Unlike the camshaft position sensor or mass air flow sensors, which are inside the engine bay, the oxygen sensor can only be found in the exhaust system. It’s here because it not only supports emission control assistance, but it also enables the fuel injection and engine timing systems to carry on working in an efficient way.

Performance would be restricted if the oxygen sensor were to fail, the information about the air-to-fuel ratio wouldn’t be accurately read by the electronic control module. As this sensor centres around emissions, the effect on the environment would be negatively impacted, and the engine would perform worse overall. 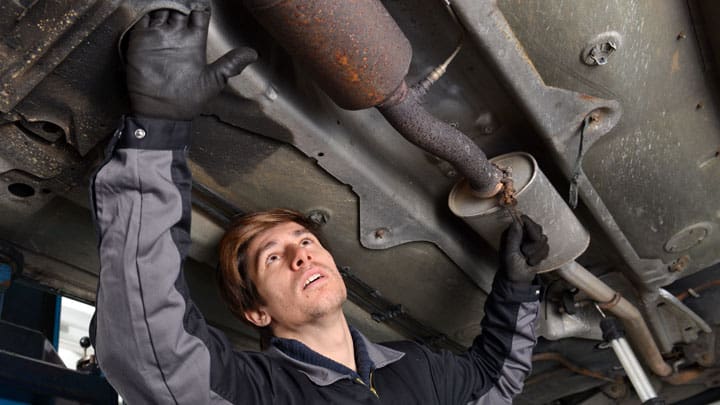 Actuator malfunctions can affect most gasoline engined cars and trucks from the last 40 years and they can affect some diesel common rail engines. If your vehicle suffers a bad injector, a bad fuel pump, or just old, decrepit spark plugs – then these can also cause a loss in power.

Spark plugs, used in gasoline vehicles, may experience issues if they continue to be used beyond their useful lifespan. Spark plugs are important because they play a vital part in the internal combustion process.

The air and fuel mixture inside the combustion chamber must be ignited by an electric spark, but for this to happen, the ignition coil sends an electrical signal to the spark plugs. Bad spark plugs will negatively affect engine performance and may lead to the engine not starting at all.

If you’ve just read number four of the causes of lost power during acceleration, you’ll know that the ignition coil is vital for sending the electrical signal to the spark plugs, which can ignite the combustion chamber.

Again, this only affects gasoline engined vehicles, and as part of the ignition system, ignition coils are an electronic engine management element whose principal role is to convert 12 volts of power into 20,000 volts that is required to encourage the spark plugs to ignite the air and fuel mixture in the engine.

Without the ignition coil, the engine would lose power, and you would have issues accelerating, and in some cases struggle to start the engine.

Another actuator problem affecting gasoline and some common rail diesel-engined vehicles are bad fuel injectors. Injectors became more commonplace in the 1980s and effectively replaced the job of a carburettor, whose job was also to send fuel to the engine.

Today, most cars and trucks feature fuel injection systems. They still have a tendency to go wrong eventually through malfunction or damage, and this will affect the amount of power you have to use the engine to its full potential. Anything from engine misfires, non-starting issues, rough idling or a fluctuating RPM needle can be tell-tale signs of a faulty injector.

The fuel pump in a gasoline engine has two main responsibilities; number one is to deliver fuel at the right pressure, meeting the engine’s maximum performance demands, and number two is to transfer gas from the fuel tank and deliver it to the engine.

With fuel being such a vital ingredient to successful combustion, a faulty fuel pump will cause acceleration and cruising problems, with even potential issues starting the engine.

Mechanical malfunctions can happen with any car or truck fitted with an internal combustion engine. If your car has a clogged exhaust manifold, neglected service items like a dirty air filter or clogged fuel filter, or even a more serious issue of low compression – they all can lead to you losing power while accelerating.

It’s only right that we cover fuel filters in this list, having just mentioned above how fuel injectors and fuel pumps can affect acceleration. Situated between the fuel injector and fuel pump is the fuel filter, and its role in the fuel system is to filter impurities that come from the gas tank. Here, clean gasoline should be all that enters the engine.

Fuel filters in older cars are see-through, and you can actively see the fuel going through the filter, while modern car fuel filters are more hidden, but the principle is the same. The filter acts as a barrier to trap the contaminants in the gosline and your car’s engine.

Once a fuel filter becomes clogged or damaged, it won’t be able to send cleaner gas through to the engine and could allow unfiltered contaminants which can damage the engine. You would notice acceleration loss and a degradation of your car’s functionality as a whole. None of this is worthwhile as a fuel filter replacement is not only simple for a DIY mechanic, but it’s cheap too.

Just like fuel, air is vital for the internal combustion cycle, so that they mix together during the compression stage of the four-stroke cycle to run the engine. Air filter replacements are another DIY job for a home mechanic that can be done inexpensively. The air filter’s role is to send clean air to the engine, keeping out impurities, road dirt and insects.

When the air filter becomes clogged or damaged, dirt and other impurities can get into the engine, potentially causing serious damage. A clogged air filter will prevent the right amount of air entering the cylinders to allow for normal combustion, affecting the amount of power you have to not only accelerate, but to run the car too. Routine replacements of air filters do not have to be done as often as oil filters. Some automakers recommend air filters can stay unchanged on a regular used car for up to four years, depending on mileage. Some air filters are reusable and can be easily cleaned, such as a K&N.

Once the fuel and air have been compressed, the gases then need somewhere to leave; and exhaust pipe technology has become more advanced in the past few decades.

Most exhausts are fitted with two types of filters, which include a muffler and a catalytic converter. The latter converts toxic exhaust gases leaving the engine and converts them to much cleaner gases such as carbon dioxide, water and oxygen. The muffler, on the other hand, just limits the noise from the exhaust.

Cylinder compression in any car with an internal combustion engine is paramount to the powering of your vehicle. Low compression affects power, and it’ll affect the reliability of an engine and is potentially the most serious issue on this list that affects the power delivery. Serious examples of low compression can relate to bad piston rings, head gasket failure, holes in the piston, bad timing belt and leaky valves.

Any of these examples can leave you stranded, and awaiting an expensive bill which could include replacement of the engine itself.