Bad Struts symptoms: Signs They’re Bad and How to Replace Them

In this article, we’ll discuss the importance of struts, the reasons they fail, signs of worn struts & Bad Struts symptoms, and the cost of replacing them.

There are several types of struts. The most widely used, by far, is the MacPherson strut.

On some vehicles, struts are used in both the front and rear suspensions. Other vehicles have struts in the front and shocks in the back. People often confuse struts and shocks. Shocks, or shock absorbers, help moderate a vehicle’s impact and rebound. Struts, like shocks, perform a damping function. In addition to that, though, struts provide structural support to other parts of the suspension system and keep the tires aligned. Struts play a role in control, braking, and steering. (More on that later.) Air struts are similar to regular struts, but they use inflatable air pockets in place of the coil springs.

Shock absorbers are not designed to support the weight of the vehicle. Their purpose, again, is to moderate bounce by releasing the energy stored in the coil springs in a controlled manner.

The shock absorber and the coil spring are designed to work in tandem. One can’t function effectively without the other. For that reason, shock absorbers and coil springs are integrated into a single, compact unit.

What is the purpose of struts? 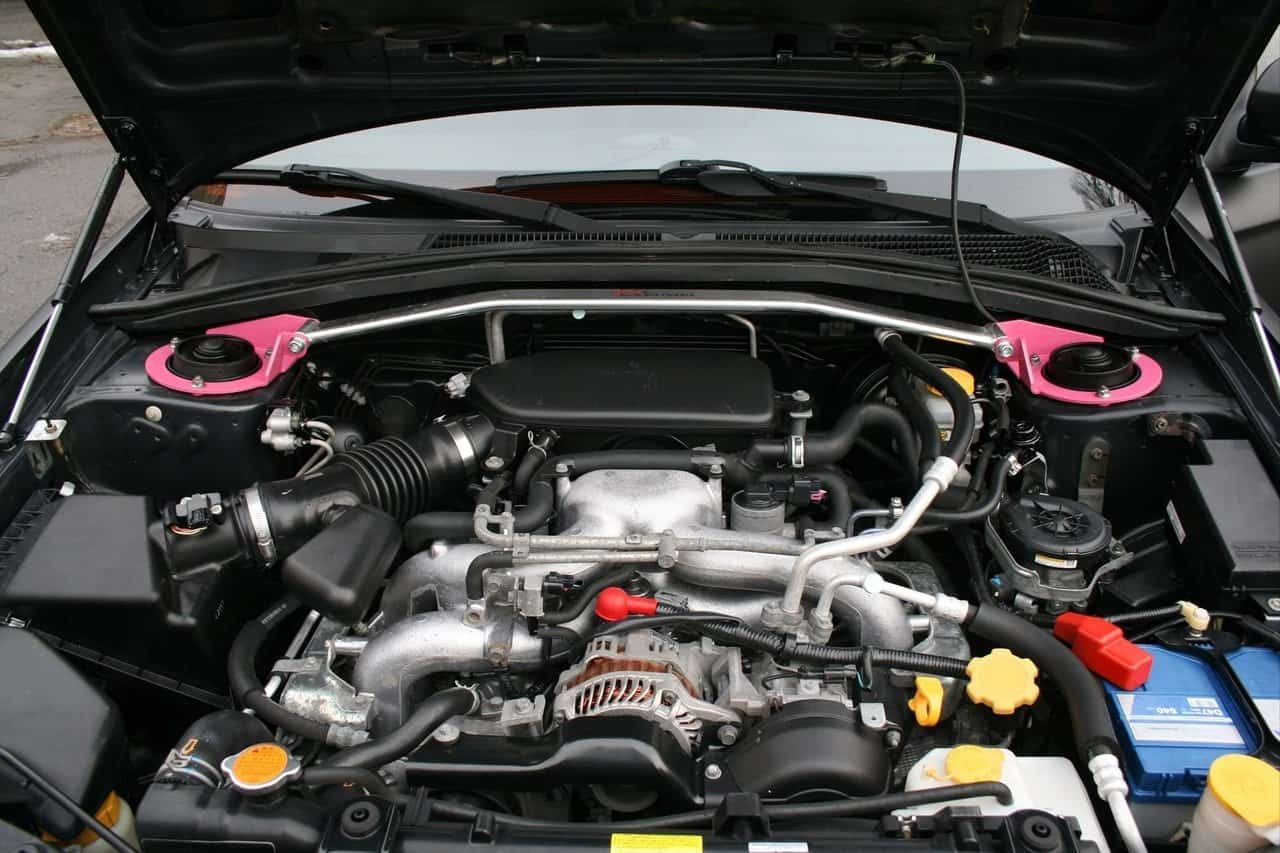 The purpose of struts is fivefold: to support the weight of the vehicle, to reduce vibrations from the road, to provide stability, to improve traction, and to enhance riding comfort. Struts are critical components that help the vehicle operate safely and efficiently. Because of their many crucial roles, struts need to be checked regularly to ensure they’re in tip-top shape.

Keeping the vehicle stable as it moves is another function of the struts. Keeping the tires in contact with the road provides the traction necessary for acceleration, cruising, and braking.

When taking a turn, the vehicle’s weight shifts in the direction opposite the turn. If the struts aren’t stiff on the side of the turn, the vehicle can roll since its center of gravity has shifted, and the suspension can’t accommodate. Together with the other suspension components, the struts ensure that your vehicle keeps its balance.

What causes struts to fail?

Given their location on the vehicle, struts are subjected to some intense motion. While struts are designed to withstand a significant amount of abuse, they can succumb to ordinary wear and tear, excessive vibration, corrosion, and heavy loads.

Vibration is the most common cause of strut failure. While the struts are designed to withstand typical levels of vibration, excessive oscillation and pressure can damage them. Vibration usually comes from the road surface, but it can also come from the vehicle. Worn bearings, poor alignment, and out-of-round tires can produce abnormal shaking that can damage the strut assembly.

Another cause of strut failure is contamination from water, oil, or dust. These substances can seep into the unit, corroding its components (like seals and bearings). When the seals of the shock absorber corrode, the oil inside can leak out of the body, preventing the shock absorber from damping effectively.

Your driving style has a direct effect on the life of your struts. Sudden braking, sudden acceleration, and rounding corners at high speeds places a huge load on your struts. This could stress the strut components to their limit, increasing the risk of damage and accelerating wear. Although robustly constructed, even the best struts can only take so much.

Towing or driving with heavy loads places strain on the vehicle. The added weight of the towed or carried load will be borne by the struts. When coupled with sudden braking, abnormally heavy loads are shifted to the struts (due to the momentum of the vehicle). A vehicle that is constantly under heavy load will need its struts replaced more often.

Another factor that contributes to strut wear is the terrain. If you’re constantly driving on pothole-filled roads or you indulge in a little off-roading, you may need to replace your struts sooner than someone who racks up a lot of miles on a well-kept highway. Conversely, if you are driving on smooth roads, driving at posted speeds, and braking with plenty of time to spare, you may be able to extend the life of your struts.

How often should you replace your struts? 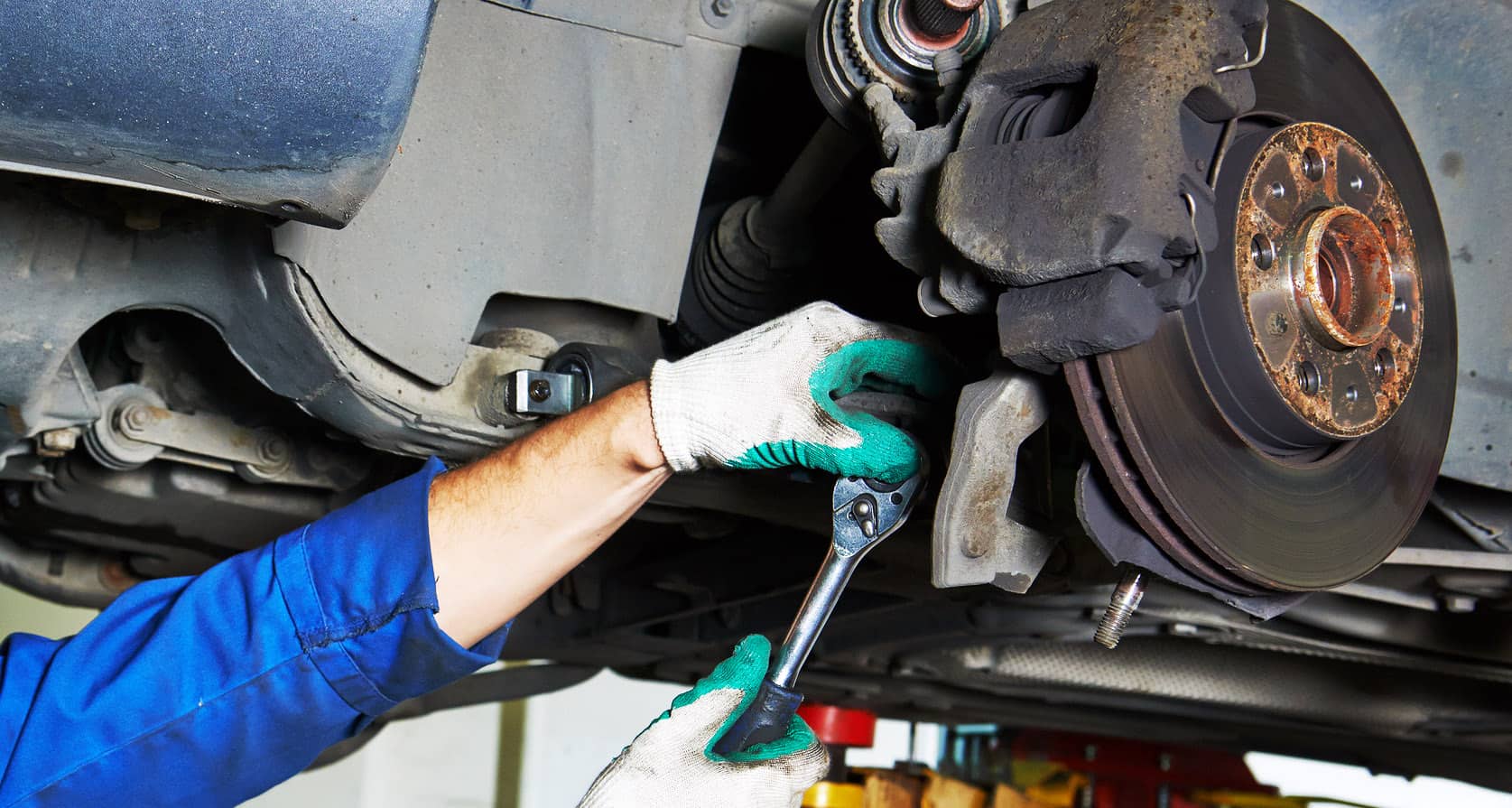 The maintenance interval of struts varies depending on the make, model, and driving conditions. Most car manufacturers recommend that you change your struts every 50,000 to 100,000 miles.

Due to advances in manufacturing and materials, modern struts can last for years without replacement. However, over time, they’re sure to wear down.

What are the signs and symptoms of worn struts?

The most common signs of bad struts are pretty noticeable and can typically be felt while driving the vehicle. Usual signs include:

The first obvious sign of bad struts is a bumpy ride. If the struts are worn, the vehicle may bounce more aggressively, even on flat, smooth roads. Excessive bouncing is often linked to bad shock absorbers, though.

Body roll is easy to feel when you’re taking a turn. If your struts are worn, they may not provide the necessary stiffness to prevent the car from rolling on its side (or at least shifting a little). Too much body roll is a critical safety issue, especially at high speeds.

Uneven tire wear can be caused by improper alignment, damaged wheel hubs, or worn suspension components. In the case of bad struts, specifically, uneven tire wear is caused by poor contact with the road surface. The most common wear patterns associated with bad struts are cupping and abnormal outside and inside wear.

Worn struts can adversely affect handling, since the wheels may bounce at a higher rate than usual. Bouncing wheels can’t provide adequate traction because of inconsistent contact between the tire and the road. This creates a dangerous situation since it can lead to loss of control, especially at high speeds.

How much does it cost to replace struts yourself?

When you take the labor cost out of the equation, the cost of replacing struts yourself can be broken down into two parts: the cost of the strut assemblies and the cost of the tools you’ll need. Struts usually cost around $700 per pair. Swapping struts only requires a few sockets, a breaker bar, and a torque wrench. If you don’t have them, you can get quality tools for less than $200.

It’s worth noting that strut replacement is labor-intensive, and it can be dangerous if performed without the proper tools. If you’re inclined to do the job yourself, prepare by reading (authoritative) advice, watching a video or two, and picking up the proper tools.

How much does it cost to have struts replaced by a mechanic? 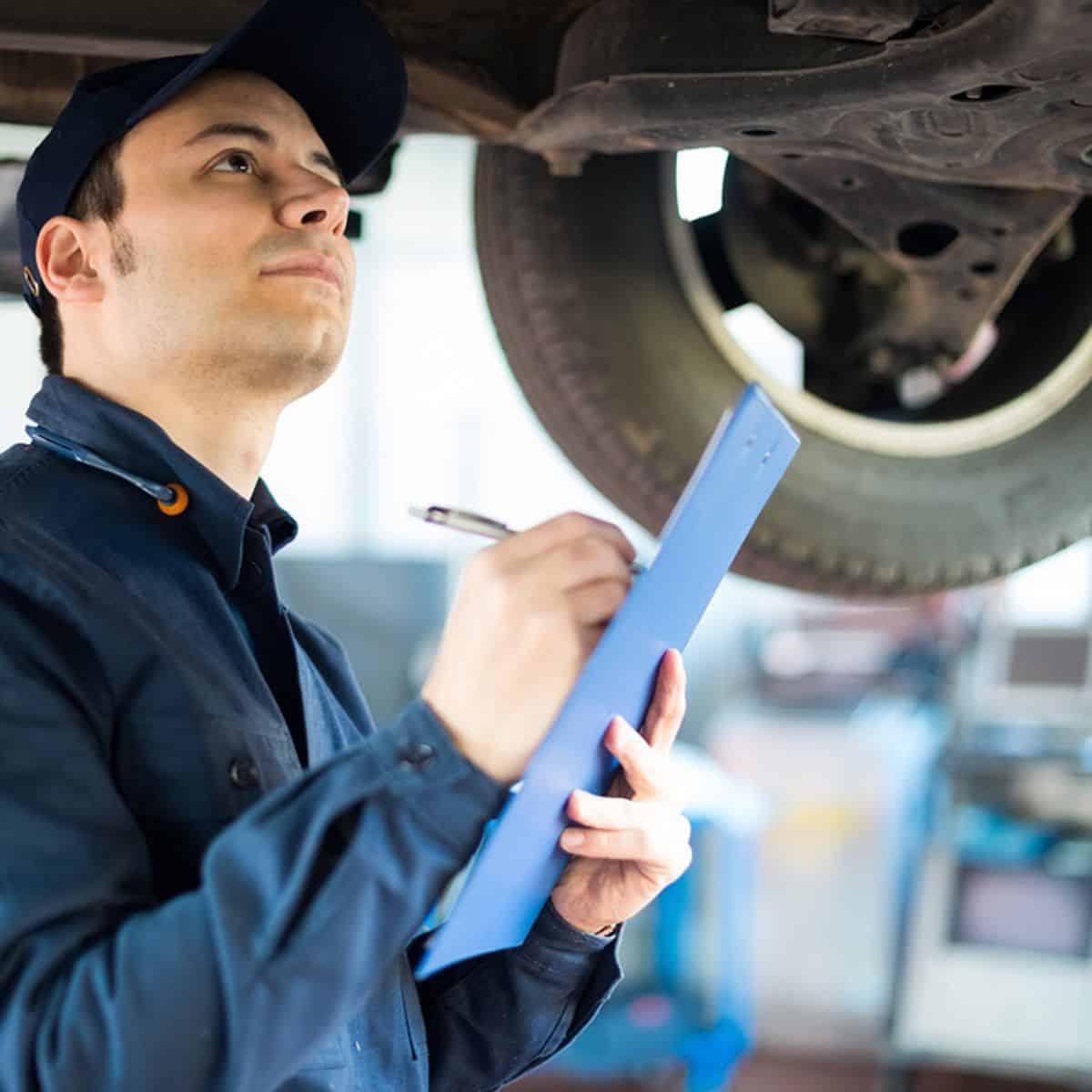 The cost of having your struts replaced by a mechanic depends on where you’re taking the vehicle – i.e., whether you choose a dealership or an independent garage. It’s essential to distinguish between the two because they each have advantages and disadvantages, which we’ll break down below. In general, the cost can be split into three categories: the parts, the labor cost, and miscellaneous fees.

The typical labor cost of strut replacement varies from place to place (due to different labor laws that factor in the cost of living in the area). Strut replacement usually takes an hour or to, if all goes smoothly. Expect to pay around $100 to $150 an hour for labor at a dealership and $75 to $100 for an independent mechanic.

What happens during a strut replacement?

In simple terms, the old struts are removed, and the new ones are installed. A wheel alignment is a necessary part of the process, as the alignment will be thrown off by the procedure. Struts are replaced in pairs, even if one of the struts is in good shape. This ensures that the struts are balanced and that the new strut is not compromised by the older one.

Strut damage and wear are usually confined to a single component and not the entire assembly. In some cases, the faulty part can be replaced without replacing the whole unit. Single part replacement is advisable only if the rest of the assembly is in good condition.

Depending on the extent of wear, the whole strut may need to be replaced. This is particularly true if the coil spring or shock absorber is worn. Loaded or complete strut assemblies are expensive, but they’re an easier option if you’re doing repairs yourself (as there’s no disassembly involved within the component).

Can you drive with bad struts? 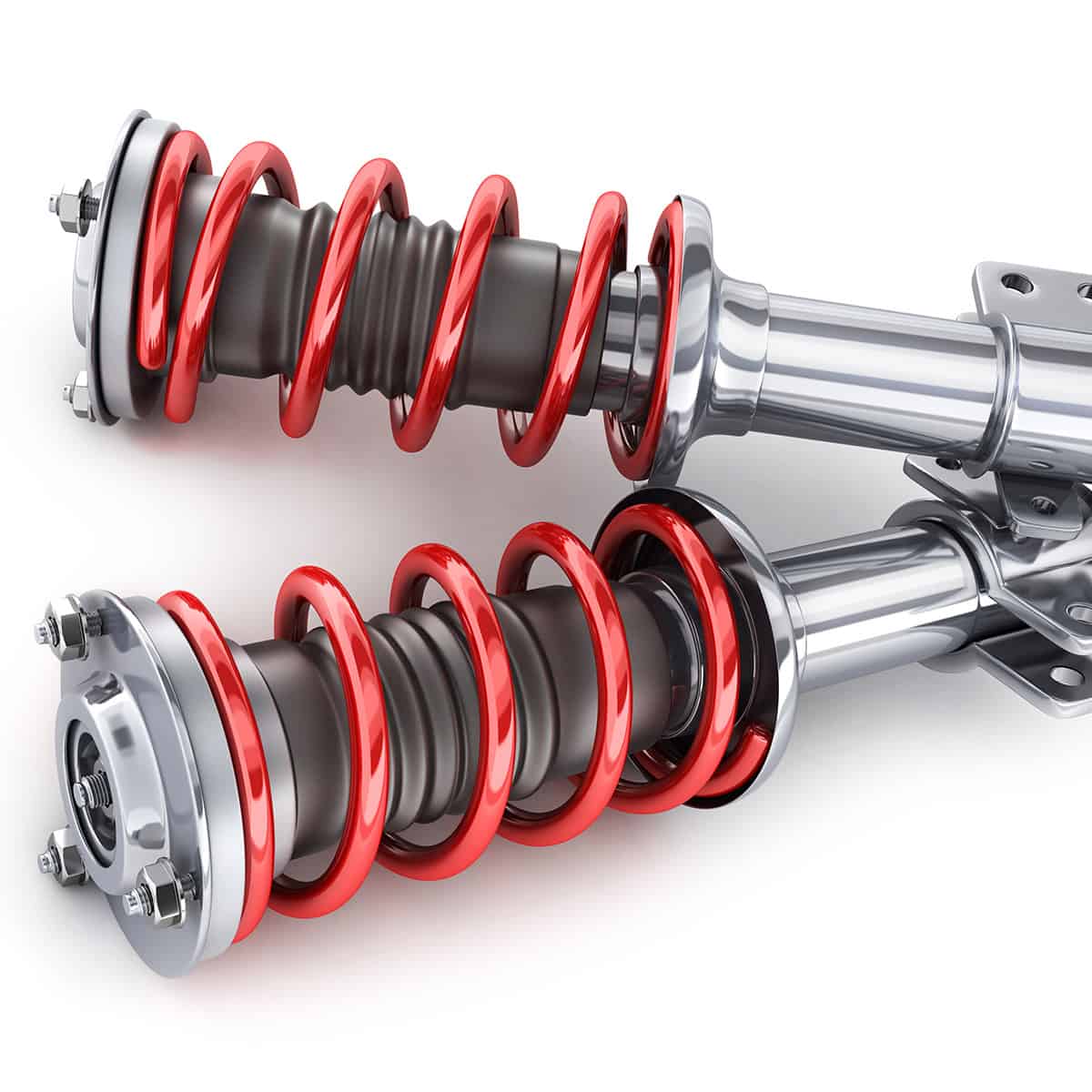 Aside from taking the vehicle to a mechanic for repair, it is generally not advisable to drive with bad struts. Driving with bad struts is a safety issue since it can lead to loss of control. Additionally, driving on bad struts can damage steering and suspension components, which could lead to more costly repairs.

Good struts are crucial in keeping your vehicle safe on the road by controlling the amount of roll, dive, and squat. Struts improve vehicle performance and keep your ride smooth. When struts fail, don’t compromise on safety. Head to a mechanic as soon as you can.